Ecuador and speedway? Why not. Mariuxi Taranto was born in Ecuador, but she tried speedway for the first time in California. Later, she had a large number of training sessions in Switzerland and Italy. Join us in an interview with Taranto.

Konrad Cinkowski (twojportalzuzlowy.pl): Where did your interest in motorcycles come from?
– When I was a little girl and I was living in Ecuador, my sister had a boyfriend with different motorcycles, and he would take us for the rides. We would go three of us together on one bike, back then we didn’t wear helmets and I fell in love with the feeling of the wind hitting my face.

– And when did you start riding your first bike?
– I was living in California at that time and I bought my first bike when I was about twenty years old. It was a 1981 Honda 650 custom and I paid 400 USD for it. I rode it for a couple of years until my daughter was born, and then I sold it.

– You had your first contact with speedway in 2013. Tell us something about how you came across speedway.
– So I picked up motorcycling again when I moved to Europe in 2013, and I was looking for schools. I travelled to Italy and I met Andrea Maida at the Ducati Riding Experience. He had a private school in Rovigo, so I went there for three years as I was hoping to become better at racing. I saw all his trophies and race suits from his speedway years and I begged him to take me to a Speedway race. I was fascinated immediately.

– Why did you decide to try speedway?
– I was blown away with the bikes going sideways. I wanted to try doing it as well. 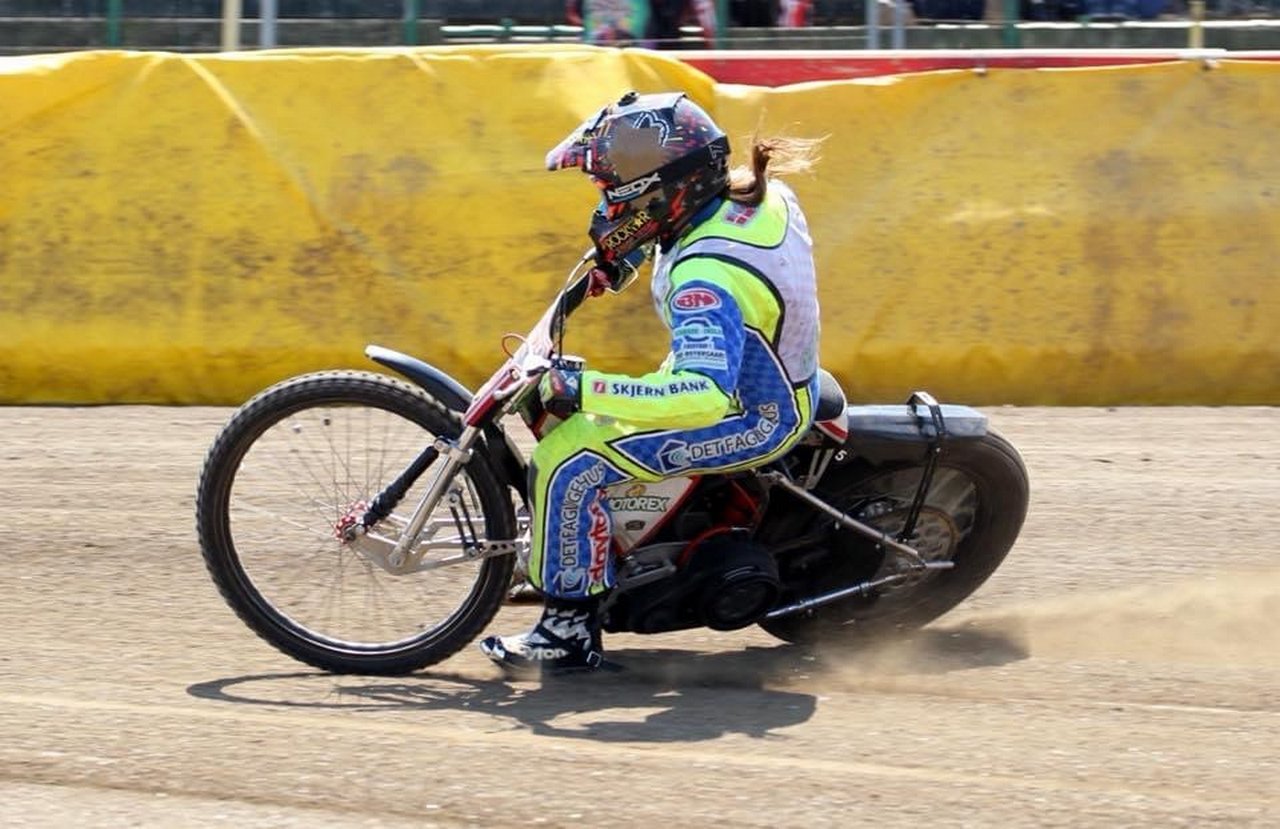 – How did your family react to your decision?
– Well I am the only one motorcycle rider in my family, and my parents live in Ecuador, so they do not really know how dangerous it is to ride a speedway bike. The only one that was not very happy about me riding motorcycles in general was my dad. He wrote me a letter and sent it by mail. In it he explained to me why he opposed it and in the end he said „I know that you won’t listen” so he enclosed leather gloves in the envelope for me to wear.

– However you had your first training session after two years. Why?
– The main reason is because I live in Switzerland, and we do not have tracks here. The nearest speedway track where I can train is eight hours away from my house – in Potenza Picena, Italy. The track owner, Paolo Salvatelli, will help me with the maintenance and instruct me, but to learn it well, I need to be on the bike every weekend. In the end it became very expensive and tiring with all the travelling. Finally I have switched to Flat Track with their bikes that I can work on my own. Besides that, the techniques are completely different, and my goal was to race, so I had to choose.

– As you have mentioned earlier – your first speedway coach was Andrea Maida, ex-rider. How do you remember your cooparation?
– I met Andrea at the Ducati Riding Experience school in Italy. I was a beginner rider and my goal was to race motorcycles, so we built a plan to get me there. We started the school with cones in the parking lot of the Adria Raceway, eventually we move to the streets and later to the race track. All in a period of three years. During that time, I met many of his speedway friends that I am still in contact with and we occasionally travel together to watch Speedway Grand Prix races.

– Did anyone else help you?
– In speedway Paolo Salvatelli with the bikes and tips, Giancarlo Degan, former mechanic of Andrea Maida, helped me with my bike maintenance. I also travelled to the United Kingdom for a Woman Speedway Day organized by Alan Critcher. He provides the bikes and tries to get more women in speedway and with the other motorcycles I have been to many road racing schools all around Europe. 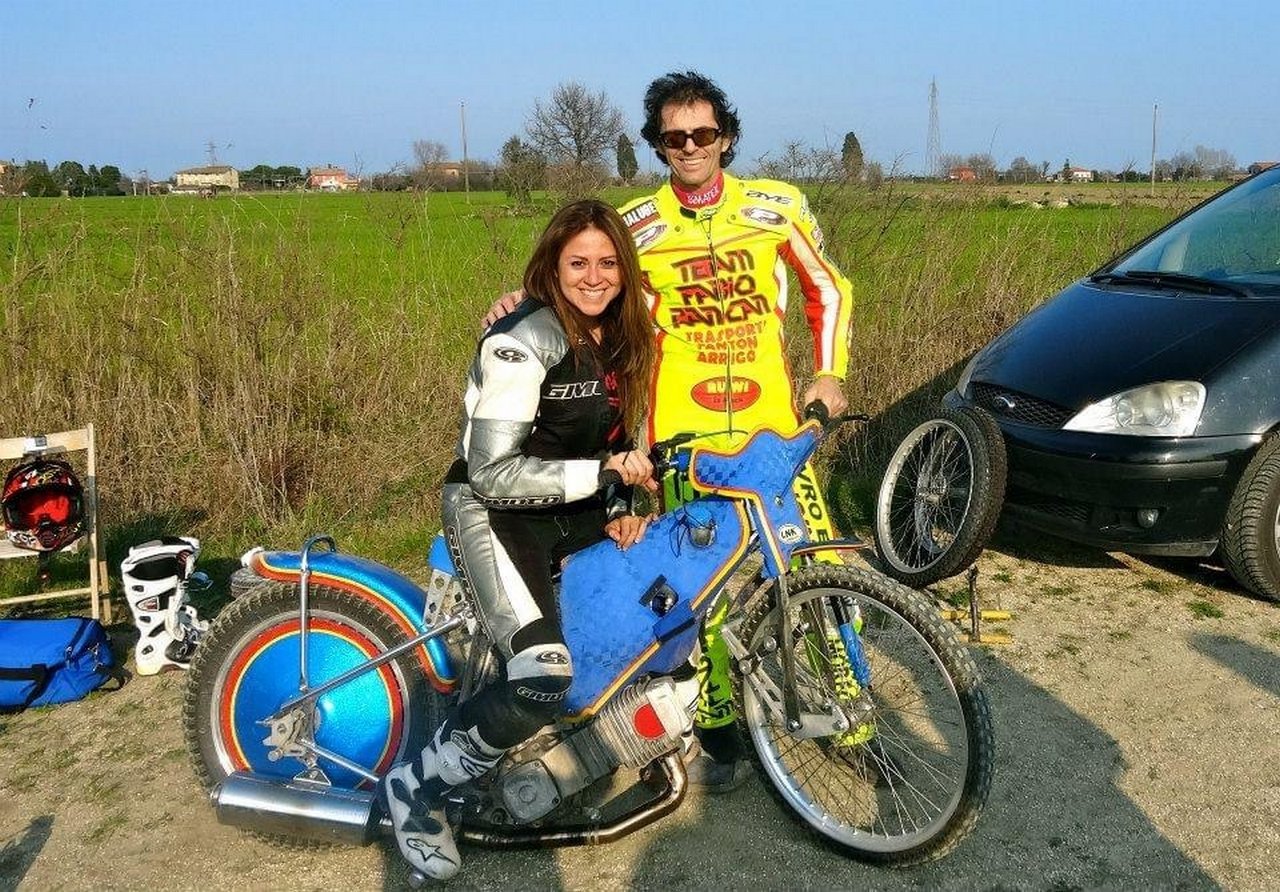 – Did you have your own bike or did you borrow it?
– In the beginning I used the speedway bike that belonged to the track owner and later on, during one of my trips to the United Kingdom, I bought a Jawa 500 from Peter Boast. It is currently in Italy in my friend’s house as he helps me with the maintenance.

– Which speedway rider is your role model and why?
– A role model for me is someone who is committed to giving back to the sport. I do admire Greg Hancock because despite his age he could still win championships. Tai Woffinden, Bartosz Zmarzlik, Nicki Pedersen are all very exciting to watch. I like to say that I admire Celina Liebmann as she was the first woman to score points in the polish speedway league and all the girls out there making a difference in the sport.

– Are you still racing in speedway, even just to train or are you completely done with this sport?
– I stopped as I have decided to race Flat Track and the technique is different. I am also alone and not as young as I used to be. It takes courage to open that throttle completely at the entering of the curve in a small track with no air fences. I would risk a lot for nothing as I don’t have a place to race near me.

– Besides Flat Track, do you race or compete somewhere else?
– My main focus today is on Flat Track, but I also enjoy travelling with my Ducati 1199s. I go occasionally to the race track with my GSXR1000 or join a fun races on my ovale 160/pitbikes.

– How do you see the future of women speedway? I think, for now, there are no chances to built Women League or Individual Championship series…
– I think that it is slowly growing. I always see more girls racing and they just really need the support of the speedway community, fans, and the sponsors. We need to advertise it to show more young girls that it can be done. 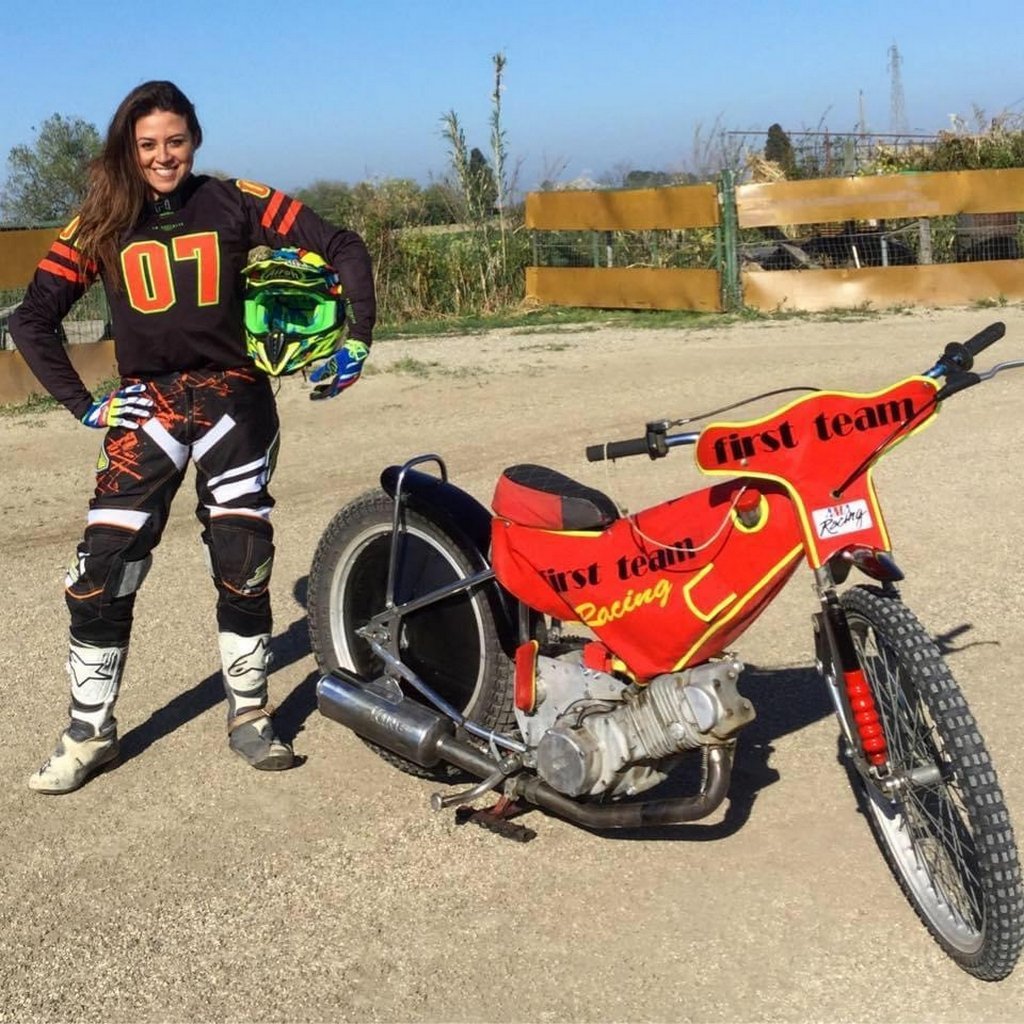 – Do they know what the speedway is in your home country? Does someone in Ecuador knows of Tai Woffinden, Jason Doyle or any other rider?
– We do not have a dirt track for speedway in Ecuador and to be honest I left the country in 1995, so I have no real connection to the motorcycle world there. I was approached once last year though. They contacted me regarding setting up the Flat Track there.

– Do you think that if the track was built in Ecuador, the sport would get some interest in your home country?
– Yes, why not? It only takes one person with a vision and commitment to start something. They need to believe that it can be done and make it happen.